There are basically two categories of soups: transparent broths or “consommés” and thicker, creamier soups (potage liés). Consommés include classic chicken broth or vegetable broth, which is also known as bouillon. Broths are light and less filling than creamier soups or stews. That’s why they are often used as starters or snacks. Thicker soups are generally pureed or have vegetables or meat in them, though usually in relatively small quantities. They are thickened with rice, barley, potatoes or flour.

Unlike soups, stews aren’t pureed or transparent, and rather than containing just a few small ingredients, the more the better is the motto! They are more filling than soups and you can always eat them as a complete meal. Stews traditionally contain pulses such as linseed, peas or beans, lots of vegetables and meat. They are actually one of the oldest dishes around. There are many different recipes for stews and they were popular as long ago as Roman times. There are no limits on flavour or creativity when you make a stew. Simply put anything you like in the stew pot.

Kikkoman has designed a range of soup and stew recipes that make delicious starters, snacks or mains. Try our light Teriyaki Vegetable Soup with Sesame Sauce. If you buy your ingredients fresh from the market your soup or stew will be very healthy and rich in vitamins. Our low-cal Mushroom Soup makes the perfect autumn meal. And our popular Spanish Pepper & Tomato Soup is fiery, warming and makes a very eye-catching dish. Our Teriyaki Style Goulash Soup is a hearty and filling meal, whether you’re a gourmet food fan or prefer more wholesome fare.

Home-made soups can be kept in the freezer for several weeks. To make sure you preserve all the vitamins and nutrients, freeze the soup as quickly as possible. The best way to do that is to divide it up among several small containers.

But be patient when you thaw it again because heating up the soup too fast destroys all the beneficial nutrients. 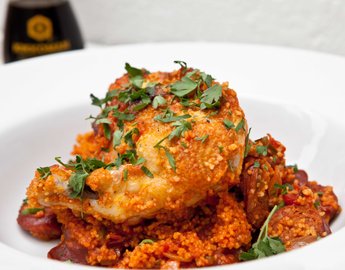 One Pot Chicken and Couscous