During the hundred years from the mid-seventeenth century to the mid-eighteenth century, soy sauce production led by the Mogi and Takanashi families prospered in the city of Noda in the Chiba Prefecture. This is where Kikkoman was born.

Noda is located on the Kanto plain, once one of the largest production centres for soybeans and wheat. It was easy to secure the necessary workforce in this region, owing to its growing population following on the establishment of nearby Edo (today Tokyo) as the capital of Japan. Besides its geographic advantages, boat transport had developed in Noda, which was blessed with two major waterways: the Tone and Edo rivers. This made the transportation of ingredients and the delivery of the manufactured products to Edo possible.

Based on historical documents, nineteen soy sauce brewers set up an association in Noda to ship soy sauce mainly to Edo. By the mid-nineteenth century, Noda had become the largest soy sauce producing town in the Kanto region.

In the mid-seventeenth century, traders had begun overseas exports of Japanese soy sauce, and exports of Kikkoman Soy Sauce started in the mid-twentieth century. It was only after the Second World War, however, that Kikkoman’s business abroad expanded significantly. Following the war, occupation forces, journalists and other foreigners resided in Japan. Seeing that they were becoming familiar with Japanese cuisine and its use of soy sauce, Kikkoman saw great potential in overseas expansion.

In 1979 the European sales base was established in Düsseldorf, Germany. In 1997, a new factory was opened in Sappemeer, The Netherlands.

The mission and dream of Kikkoman is to make Naturally Brewed Soy Sauce a standard global seasoning.

All about Soy Sauce

Do you know how soy sauce was developed centuries ago? Find out more! 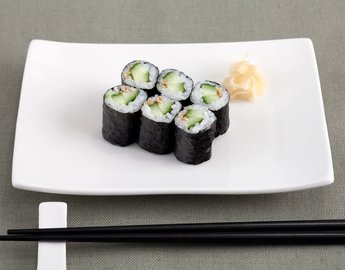 How to make Sushi